The American School of Modern Music distinguishes itself by its commitment to offer a faculty of outstanding musicians chosen not only for their links with the United States but also for their standing as professional musicians, renowned and active in the international music industry. 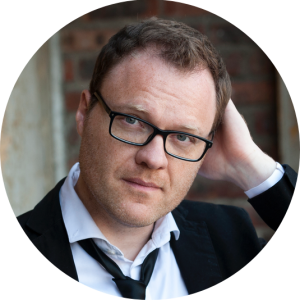 Cédric has had the pleasure to work, record and play with : 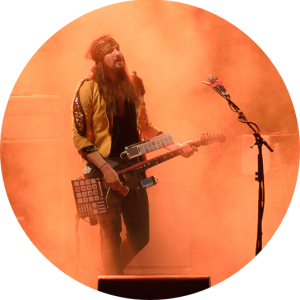 A graduate of Berklee College of Music in "Music Production and Engineering," Brad Thomas Ackley has an unusual and eclectic career. He is known in France for his work on the fifth studio album ("IL”) by Matthieu Chedid (-M-) having produced, recorded and mixed it as well as his participation in the world tour that followed (Victory Music Award for the best musical / tour / concert 2014).

Sound engineer on the film "The Matrix Reloaded" Brad is also a composer for film, television and advertising, “Never on the First Night," "A Moment of Madness", "HBO-God Save Our Shoes," "MTV-The HIll " Renault, Lacoste, Collette, Adidas, IKEA ... 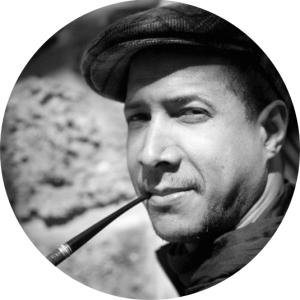 His projects (Magic Malik Orchestra, Tranz Denied ...), his exceptional career and his research (especially on "tonal signatures") make him one of the key musicians of his generation. 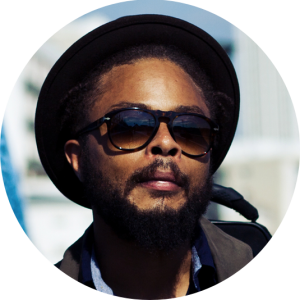 Lou Tavano began playing the piano at five, singing at ten and acting at fifteen.

At twenty she meets her alter ego Alexey Asantcheeff, at twenty-five publishes her first EP, at thirty her first album.

In November 2012, she released her first cover EP Meets Alexey Asantcheeff (self-produced) with which she toured in France and Germany in 2013 and 2014. She thus attracted the attention of many professionals, including Siggi Loch, founder of prestigious German label ACT, which signs it on the spot.

An active member of this young French generation who comes to renew jazz, she draws from a melting pot of current influences the raw material for her second opus "Uncertain Weather" (L’UN L’UNE / L’Autre Distribution). 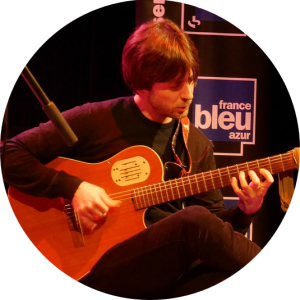 At the age of 14 he left Brazil to study in France . Sought after because of his musical culture shaped by Brazilian standards, he is noticed by Frank Cassenti while shooting the film Just a Dream where he meets Pat Metheny.

In 1996, Nelson Veras played with the Michel Petrucciani Sextet and His Young Lions with Detlev Beier (b), Flavio Boltro (tp), Olivier Ker Ourio (hca) and Manhu Roche (d). He entered the jazz class at the Paris Conservatory in 1997. 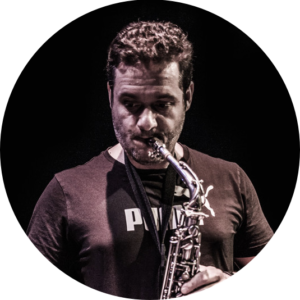 Denis started the music in 1983, enter to the Conservatory of St Brieuc in 1988 and then took classes with Pierrick Pedron. In 1992 he enrolled in Musicology and taught as an assistant at the CIM.

After a first record with the Multicolore feeling of Eddie Louis in 1991, he meets Magic Malik with the Human Spirit and follows him in the Magik malik orchestra. A collaboration of 20 years follows, 7 albums and many international tours on the most prestigious stages: Marciac, North Sea Jazz Festival, Montreal Jazz Festival, Barbican Center London, Knitting factory ..

In parallel, he leads his sideman life with Paco Sery, with whom he has been shooting for 1.5 years. 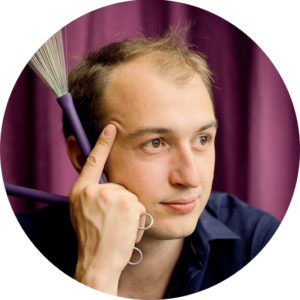 A graduate of Berklee College of Music and Manhattan School of Music, Raphaël has already recorded more than twenty albums as a sideman and has performed with artists such as Lee Ritenour, Steve Wilson, Bob James, Marcos Valle, Eric Lewis, Manuel Valera, Rotem Sivan, Lage Lund among others.

At just 30 years old, he released his first album “Faune” on September 18, 2020 as a leader with the jazz giants Miguel Zenón (alto saxophone), Aaron Goldberg (piano) and François Moutin (double bass). Produced by the French Paradox label, “Faune” has already been voted “revelation” by Jazz magazine. 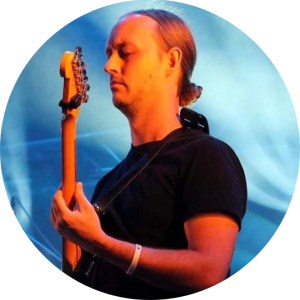 Founder of the Guitar-Sessions with Edouard Brenneisen and Co-Director of the American School of Modern Music. 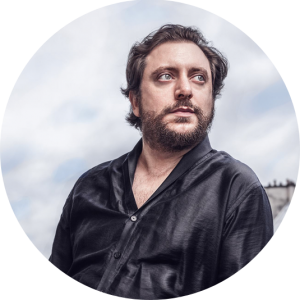 Trained at the American School of Modern Music and at the prestigious Berklee College of Music, Jonathan Joubert continued his career as a guitarist, composer and arranger straddling his native Paris and the United States.

He had the opportunity to share the stage from Paris to New York with the likes of Mark Turner, Trotignon, Benjamin Henocq, Tchavolo Schmitt, Boulou Ferre, Stephane Wrembel, Denis Chang, Ben Powell, Florin Niculescu, Pierre Manetti, Cedric Hanriot among others.

He is also Co-Director of the American School of Modern Music with Guillaume Estace.

After studying at the CNR in Châlon sur Saône and at the Didier Lockwood Music Center, Clément Janinet obtained a first prize from the Jazz and Improvised Music department of the CNSMD in Paris in 2007, then won the springboard of the defense festival within the Radiation group. 10.

Passionate about African and South American music, he multiplies encounters and trips around the world to incorporate those influences. He developed his own techniques which he integrates into jazz and improvised music which give him a unique sound.

He has been playing with the formations of Etienne Mbappé and Simon Winse since 2007 and in a duet with Benjamin Flament since 2011. Since 2012, he has been part of the company “La vie Brève” with which he participated in the creation of “Crocodile Trompeur / Dido et Enée ”(Molière for the best musical theater show in 2014) and“ Orfeo, je suis mort en arcadie ” in 2017.

In 2017, he created the O.U.R.S quartet composed of Joachim Florent, Hugues Mayot and Emmanuel Scarpa with whom he recorded his first album as a leader (ffff télérama, Révélation Jazz Magazine)

He has also performed since 2018 with The Space Galvachers as part of the Brazza O Kilometer creation for the Africolor festival as well as with Ray Lema.

Clément janinet has given more than 700 concerts in more than 35 countries. 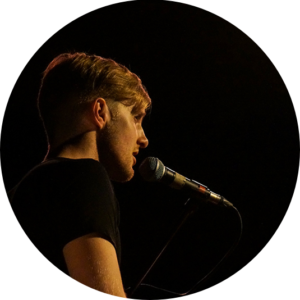 Pianist, arranger, composer and lyricist, this Franco-British of Russian origin draws his inspiration as much from the classical music of his childhood as from the jazz that saw him grow up. With his ears and heart wide open to all the current music that surrounds him, he multiplies his collaborations with the young creators of the moment: the Parisian revelation Lou Tavano, the Brazilian Diogo Strausz (Voyou), the Reunionese Bastien Picot (Aurus), Marquesan director Ory Meuel, …

Grandson of Scottish composer and conductor Jack Lockhart, Alexey Asantcheeff began studying classical piano at the age of 6, under the aegis of Italian pianist Carla Segalini. He completed his jazz training at the American School of Modern Music in Paris before following the teaching of Pierre Bertrand (Paris Jazz Big Band, Nice Jazz Orchestra, etc.) with who he explores orchestration for Big Band.

He notably co-signs, in collaboration with Lou Tavano, all the compositions of the disc For you released in March 2016 on the German label ACT, and receives recognition from the French and European press for the first album of the young singer. 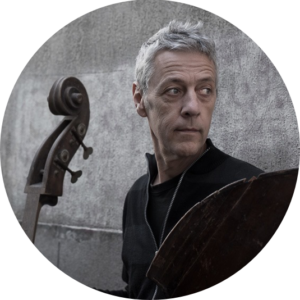 Born in Saint-Quentin on September 16, 1959. Begins music at 18 and studies double bass with Jean-Paul Macé then Jacques Cazauran, harmony and counterpoint with Julien Falk. 1981, creation of the Double Bass Orchestra with which he has played for over 30 years. Plays with many musicians of his generation (Emmanuel Bex, Simon Goubert, Marc Ducret ....) as well as with the "old ones" (René Urtreger, Georges Arvanitas, Michel Graillier ...) and foreign soloists (Lee Konnitz, Bill Carrothers, Dave Liebmann, Kenny Wheeler, Youn Sun, …)

In 1998, the first concert of the TRIO VIRET (Edouard Ferlet / piano, Antoine Banville then Fabrice Moreau / drums) with which he recorded 7 albums and gave numerous concerts in France and abroad (New York, Montreal, Japan, China, Korea ...)
Already nominated in 2003, the trio won the instrumental group of the year award at the Victoires de la musique 2011 (French Grammy Awards)

Also plays in many formations, including:

Born in Paris in 1985, Nicolas BAUER began playing bass at the age of 13 before starting his studies a few years later at IMFP, CIM and then CRD in Montreuil. He made his first scenes with multiple projects in the making while at the same time creating his first group as leader "Sezam Project" with which he released a first eponymous album in 2007. 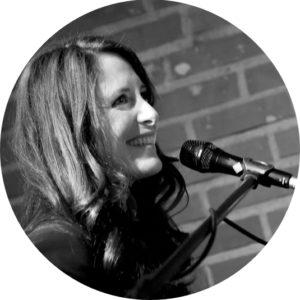 Raphaële was trained from an early age on classical piano, singing and dancing. After a literary university course, she entered the American School of Modern Music in Paris, then the Didier Lockwood Music Center from which she graduated in 2010. Student of Michele Hendricks and Sheila Jordan for vocal improvisation, she also studied with by Benoît Sourisse, Pierre de Bethmann, Olivier Hutman, Franck Amsallem and many other renowned pianists.

After having participated in several prestigious competitions (Montreux Jazz Voice Competition in 2008, Crest Jazz Vocal in 2011, etc.), in 2012 she was the winner of the Jazz in Vannes and Lagny Jazz Festival.

At the head of a quartet composed of Romain Pilon (l.), Zacharie Abraham (cb.) And Nicolas Charlier (dms), in 2011 she released her first album, Inner Stories, then in 2015 Give It Time both on the label of the duo Charlier-Sourisse, Gemini Records, in partnership with TSF Jazz and Sacem and performs on tour throughout France and internationally (Jazzahead, Kriol Jazz Festival, etc.). She made several first parts among which those of Jean-Jacques Milteau, Thomas Enhco or Airelle Besson.

She has also accompanied on the piano and as a chorister several variety artists including Liane Foly and Christophe Willem.

Any cookies that may not be particularly necessary for the website to function and is used specifically to collect user personal data via analytics, ads, other embedded contents are termed as non-necessary cookies. It is mandatory to procure user consent prior to running these cookies on your website.